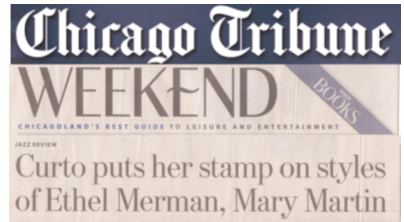 Anyone who follows Broadway lore does not often mention Ethel Merman and Mary Martin in the same breath.

The two venerable singers, after all, represented practically opposing ways of addressing a song. Merman sang as if a trumpet had been lodged in her larynx; Martin hardly could have brought more gentility and grace to the musical stage. 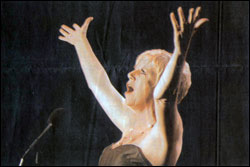 Perhaps only a vocalist as adept as Chicagoan Joan Curto could take on the legacies of Merman and Martin with equal aplomb, as she did before a full house Thursday night at Davenport’s (the show runs through Sunday). Though Curto didn’t mimic either artist, she evoked the brass and bravura of Merman’s manner, as well as the nuance and subtlety of Martin’s finest work.

That’s not to say, however, that Curto belted a song the way Merman did. Historic recordings of Merman reveal a singer capable of blasting high notes into the farthest reaches of the upper balcony, a valuable skill in the era before microphones were commonplace on the Broadway stage.

That brand of singing (or yelling) probably would not fare so well today, for high decibels alone cannot pass for genuine interpretation. So it’s something of a relief that Curto never tried to imitate Merman’s wails. Even when Curto was going full throttle, as in a medley from the epic musical “Gypsy,” she brought enough tonal support and warmth of tone to her fortissimo notes to make them a pleasure to hear.

Similarly, Curto never attempted to duplicate the silvery sheen of Martin’s singing, which would be a similarly impossible mission. Yet Curto’s honeyed middle range and sumptuously voiced high notes in “I’m in Love With a Wonderful Guy” showed that she shares Martin’s knack for caressing a melody line.

The final allure of this show drew from Curto’s distinctive way of re-interpreting music of age-old Broadway shows (aided by Beckie Menzie’s jazz-tinged pianism). The surging rhythms with which Curto ignited “Everything’s Coming Up Roses” and “Some People” (from “Gypsy”) and the sense of reverie she brought to “Speak Low” (from “One Touch of Venus”) attested to the originality of her vision.

Not that she always hits her target. Curto never quite captured the despair in Cole Porter’s “Down in the Depths on the Ninetieth Floor,” a world-weary piece that can elude even the savviest performer.

In the end, though, “Brassy, Sassy & Classy” not only rekindled memories of Merman and Martin but poetically built upon their legacies.