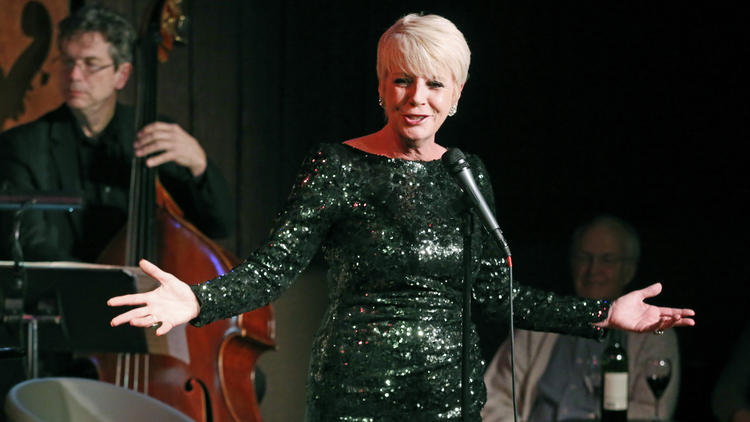 What would we do without Stephen Sondheim?

The ingenuity of his lyrics, the conversational cadences of his melodies and the jazz-tinged allure of his harmonies brought American songwriting to a level of sophistication that never really has been surpassed.

Like Cole Porter before him (and Irving Berlin before that), Sondheim fused word and melody so seamlessly that one hardly can recall one without evoking the other. Better still, Sondheim infused American song with all the ambiguities, paradoxes and contradictions of everyday life as they never had been expressed before.

All of which poses a challenge to any singer who dares present an evening’s worth of Sondheim’s work. With revered Sondheim interpreters such as Elaine Stritch and Julie Wilson having set a lofty standard for this repertoire, only the bravest soloists need take it on today.

Chicago cabaret singer Joan Curto did just that on Saturday night at Davenport’s, launching her month-long celebration of Sondheim’s forthcoming 85th birthday on March 22. She may not project as huge a personality as Stritch (who does?) or summon as gutsy a delivery as Wilson (who could?), but Curto offered her own savvy, brainy, shrewdly delivered approach to this music.

For Curto didn’t just sing the tunes — she acted the characters for whom Sondheim wrote. At the same time, she showed unmistakable musical maturity in taking on Sondheim classics and obscurities alike, never rushing tempos in dramatic passages or taking ballads too slowly. Here was Sondheim singing in which every turn of phrase and interpretive choice had been carefully thought out, as if performed by a formidable stage actor who has lived with a role long enough to inhabit it.

Curto has been singing Sondheim in Chicago for decades, in theatrical productions and interwoven into her own shows, but not in a prominent solo show devoted exclusively to his music. “Joan Curto Sings Sondheim: Everybody Says Don’t” demonstrated what can happen when a performer waits until she is ready.

Perhaps no Sondheim musical conveys more bittersweet, worldly wise perspectives than “Follies,” and Curto delved unflinchingly into its sometimes cynical, sometimes almost-hopeful sentiments. “Could I Leave You?” amounts to an anthem of romantic regret and rage, and Curto delivered it as if it were an operatic aria. She opened gently, understating the sarcasm that drips from these lyrics. In due time, however, she built to a full roar of anger, the edge in her voice matched by the aggressiveness of her stance. Pity the husband who heard those truths dispatched with such relish.

“I’m Still Here” remains the wise-cracking tour de force of “Follies,” and Curto reveled in its Jazz Age brassiness. She swung rhythms freely and fired off its zingers with aplomb, along the way revealing new meanings on some very familiar lyrics. When she hit the final crescendo — backed by Beckie Menzie’s orchestral pianism and Jim Cox’s buoyant bass playing — Curto reminded listeners that there’s a plenty of heart underneath Sondheim’s world-weary exterior.

A self-styled “marriage medley” drawn from several Sondheim shows cast some light on the subject of matrimony but much more on the songwriter’s insights into the ups and downs that make romantic relationships go ’round. Of course it culminated with “Being Alive,” a more knowing statement on how and why we love than most.

Elsewhere in the show, Curto made wickedly clear that “Can That Boy Foxtrot!” is definitely not about dancing, but she proved a shade less compelling in “Send in the Clowns.” Then, again, Sondheim’s sole “hit” has been so often performed and recorded that perhaps Curto still is searching for her own way into it.

More important, though, both the spirit and the letter of Sondheim’s music were apparent throughout this evening, Curto capturing the acidic quality of the composer’s most withering material and avoiding sentimentality in (somewhat) lighter fare.

Ultimatetly, this show marks a high point in Curto’s cabaret career, as well as an illuminating way to celebrate the riches of Sondheim’s art.